Why quantitative easing has made saving for retirement a lot harder? 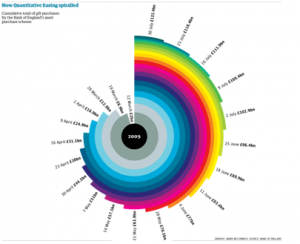 In October 2014, the Federal Reserve said it would end “QE3”: the programme of asset purchases it first announced in September 2012 and began shrinking last December. Quantitative easing, or the buying of assets with newly created money, has been the workhorse of monetary policy since rich-world interest rates fell almost to zero in 2008-09. In January 2015, the European Central Bank announced an euro-flavored quantitative easing in an attempt to revive the flagging Eurozone. ECB will be injecting €1.1 trillion into the Eurozone economy through a huge bond-buying programme over the next few months.

Despite its expansive use since the beginning of financial crise’s, QE has been good for economic recovery and borrowers but it has been a disaster for savers and investors in retirement plans linked to long-term bond yields. The program has created trillions of dollars worth benefits to the financial industry and much of that benefit has been created at the expense of government pension plans and individuals who depend upon interest earnings.

The Bank of England launched its QE programme in March 2009 with an initial spending target of £75bn over three months. At the same time it cut interest rates to a record low of 0.5%. Then in October 2011, faced with growing warnings of a double-dip recession and a eurozone crisis, policymakers voted to resume QE and pump another £75bn into the financial system, increasing the QE budget to £275bn. Six years on, the debate rages over whether QE was the best, or the fairest, way to steer Britain out of the credit crunch.

The Bank itself said that wealthy families had been the biggest beneficiaries of QE thanks to the resulting rise in value of shares and bonds. QE in Britain was designed to create inflation, which lead to negative impact on savers and pensioners. The combination of high inflation and ultra-low interest rates proved toxic for savers in general and the older generation in particular. For those approaching retirement in ‘defined contribution’ schemes, lower gilt yields as a result of QE have reduced annuity rates. Pension incomes of people coming up to retirement in a defined benefit scheme which were in deficit, whether fully funded or not, have seen those deficits increase sharply.

QE is really a hidden transfer of wealth from older generations, who have saved prudently for their future pensions, to younger borrowers and the banks. This massive inter-generational transfer happened under the guise of a policy designed to create jobs and boost the economy. Britons cannot afford to retire early anymore and have to postpone their retirement.

In both theory and practical reality, there is ample evidence to suggest that QE has been a boon to the wealthy and hurt most others. If you think your retirement plans have been affected by QE, talk to one of Dino Zavagno’s team of specialists at Gladstone Morgan to explore options that can help put your retirement plan back on track at info@gladstonemorgan.com