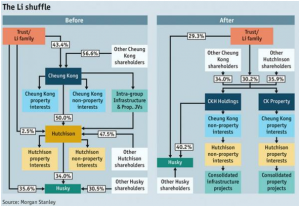 Sir Ka-shing Li, GBM, KBE, JP is a Hong Kong business magnate, investor, and philanthropist. According to the Bloomberg Billionaires Index 2014, he was the richest person in Asia, with a net worth of $31.9 billion.

Hong Kong’s richest person for 17 years, Li Ka-shing kicked off the New Year by announcing a massive restructuring of his far-reaching empire. Investors in his companies welcomed the massive restructuring plan as the stocks of his flagship Hong Kong-listed companies Cheung Kong Holdings and Hutchison Whampoa shot up 15% and 13% respectively.This led the billionaire’s fortune to rise from $2.3 billion to $34.1 billion, a jump that sent the Hong Kong resident to No. 14 among the world’s richest people.

Li Ka-Shing began investing in Mainland China back in the early 90s, way back before it became the trendy thing to do. Now, Li wants out of China. All of it.Since last year, he’s dumped billions of dollars worth of his Chinese holdings. He has ramped up his spending spree in Europe with a £1 billion (US$1.51 billion) deal to purchase Eversholt Rail Group of the U.K.

China’s economic growth slowed to its weakest in 24 years, expanding 7.4% last year from 7.7% in 2013. A hard landing would be devastating for the world economy because China is the world’s “growth engine”, and if it falters, growth around the world will also slow.Slow economic growth has implications for retirement planning. Retirement incomes depend largely on how much people earn in their working years. To know more on this topic, talk to Dino Zavagno at Gladstone Morgan.info@gladstonemorgan.com