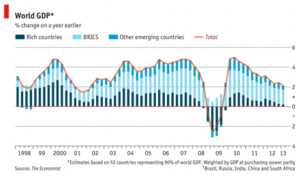 At about $50 a barrel in January crude oil prices were down by more than half from their June 2014 peak of $107. However it is now back to around $60 a barrel. The falling price has put oil-producing companies and countries everywhere under pressure.

In the trial of strength in global oil markets, it is the North American producers that are flinching first. Exxon Mobil, the largest American oil and gas producer saw its income fall to $6.57 billion from $8.35 billion in the same quarter last year. Both profit and revenue were down 21 percent from the year earlier. Other competitors also saw declines in their revenues. It is not just the oil and gas producers, but international service companies such as Halliburton, Schlumberger and Baker Hughes that support oil and gas producers with activities such as drilling, completing and analyzing wells, have also seen their revenues dive.

The oil price is partly determined by actual supply and demand. Demand for energy is closely related to economic activity. Demand is low because of weak economic activity, sluggish recovery in growth across the world, increased gas-mileage efficiency in Vehicles, and a growing switch away from oil to other fuels.

The main effect of sliding oil price is on the riskiest and most vulnerable bits of the industry. The median North American shale development in 2014 required a US crude price of $57 a barrel to break even. Saudi Arabia, the largest producer of oil, can tolerate lower oil prices quite easily. It has $900 billion in reserves. Its own oil costs very little (around $5-6 per barrel) to get out of the ground.

Thus falling oil prices are giving the North American Shale oil producers a shot in the arm. It is also taking a toll on the US labor market. In Jan 2015, U.S.-based employers announced plans to shed 53,041 jobs from their payrolls to start 2015; with 40 percent of those directly related to oil prices.

Cheaper oil should act like a shot of adrenalin to global growth. Big importing countries such as the Euro area, India, Japan and Turkey are enjoying especially big windfalls. Since this money is likely to be spent rather than stashed in a sovereign-wealth fund, global GDP should rise. There will, of course, be short-term losers. But the overall economic effect of cheaper oil is clearly positive. Just how positive will depend on how long the price stays low. For more on this topic, stay tuned to the Gladstone Morgan Blog.