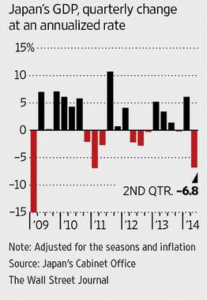 “Abenomics”, which helped Shinzo Abe win the 2012 elections in Japan and march back into power, is based on the so-called “trickle down” theory, which suggests that greater spending by large companies and the wealthy can revitalize the economy as the benefits trickle down to small firms and low-income earners. Abenomics includes a monetary regime shift, fiscal stimulus measures, and structural reforms, also known as the “three arrows.”

The Abe government had taken several aggressive measures to enliven the economy and to trigger some inflation, including a $1.4 trillion stimulus, reduction of government held debt and bond buyback. In the process, Shinzo Abe might have triggered a recession when he raised taxes in April to reduce excessive government debt. Between April and September, the world’s third-largest economy registered successive quarters of shrinking gross domestic product (GDP).

On Nov 21st, Mr. Abe dissolved his government and called for snap polls. The upcoming elections are framed as a broader referendum on Abe’s economic recovery measures. While Mr. Abe is convincing voters to choose growth, Moody’s- the rating agency, downgraded Japan’s ratings on Dec 1.

The government of Japan is now a riskier borrower than either China or South Korea. The renewed rating puts Japan’s sovereign credit rating on par with Bermuda, Oman and Estonia.

As the world’s third largest economy comes to terms with a lowered rating and its’ impact on borrowing costs, the world markets are looking for some positive guidance before the year draws to an end. To know more on this topic, contact Dino Zavagno and his team at Gladstone Morgan at info@gladstonemorgan.com