Is the Indian Tiger catching up with the Chinese Dragon? 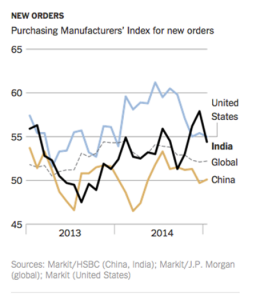 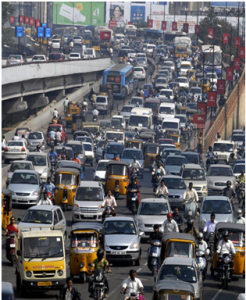 The remarkable rapid growth the world has seen in the last two decades marks the biggest economic transformation in modern history. In 1990 emerging markets accounted for less than a third of global GDP. In 2013, emerging markets accounted for more than half of world GDP on the basis of purchasing power. The most impressive growth was in four of the biggest emerging economies: Brazil, Russia, India and China. From 1993 to 2007 China averaged growth of 10.5% a year. India, with less reliance on trade, managed an average of 6.5%.

The most dramatic, and disruptive, period of growth is coming to its close. China’s economy is slowing. Brazil is struggling as commodity prices plunge. Russia, facing Western sanctions and weak oil revenue, is headed into a recession.

As other big developing markets stumble, India is emerging as one of the few hopes for global growth. The stock market and rupee are surging.

The country’s reliance on imported oil, for example, has been its bane for decades. With crude prices now halved, fuel costs for trucks and cars have plunged, pulling down transport expenses and inflation. The cost of government fuel subsidies has nose-dived, helping curb the country’s chronic budget deficits. According to the IMF’s world economic outlook report, India is set to report one of the highest GDP growth rates in 2016.

Despite intense volatility in foreign currency market in recent months with dollar surging and euro caving in, the rupee has proved quite resilient, moving between 60 and 64 against the dollar.

The country is attracting more foreign direct investment. Late last year, Japan and China pledged $35 billion and $20 billion to India, respectively, over the next five years. Auto companies, like Chevrolet, are setting up production facilities under the expectation that India will have the third largest auto market by 2020.

There was a similar level of enthusiasm last decade before growth slowed and corruption worsened. The World Bank currently ranks India as the 142nd hardest place to do business. As India’s fortunes begin to shift, the newly elected government is trying to tackle thornier economic and bureaucratic issues.

So don’t count on it just yet. But India’s economic revival is a good sign. Keep an eye on this space.