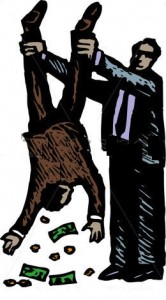 Chancellor George Osbourne keeps moving the IHT goal posts. As part of his party manifesto in 2007 he promised to increase the threshold to £1 Million.

However, since coming to power he has never increased the threshold and went one stage further by freezing the threshold when he ended the traditional annual Increase.

Britain has one of the highest death duties in the Western world and boosted the UK Treasury’s coffers by billions.

In 2009, Inheritance Tax was worth £2.4 billion a year to the UK treasury and now it is worth £3.4 billion, an increase of £1 billion, according to HM Revenue and Customs recent figures.

IHT is not levied in many countries- Inheritance Tax was abolished in Australia in 1970 and in New Zealand in 1992. Emerging economies, such as China and India, have no inheritance taxes. In America, the 40 per cent federal estate tax applies only to estates worth more than $5.34 million approximately £3.2 Million.

Britons pay a higher proportion of Inheritance Tax on their estates than almost any other major world economy. Inheritance tax, taxes you for a second time since the wealth that has been accumulated has already been taxed. Therefore, it prevents you from passing on your whole estate, which you have worked hard to accumulate, to your children

Since Inheritance Tax is charged at 40% tax on all asset above the tax free threshold of £325.000 and with average central London Property prices close to £500,000 many will need to consider their position.

One can safely say it is a big money spinner for the UK Government!!

If you would like to discuss the possibilities of IHT, contact a member of Dino Zavagno’s team of advisers at Gladstone Morgan to arrange a meeting.

It should be noted the services available from Gladstone Morgan Limited would vary from country to country. Nothing in the comments above should be taken as offering investment advice or making an offer of any kind with regard to financial products or services. It is therefore important to reinforce that all comments above are designed to be general in nature and should not be relied upon for considering investment decisions without talking to licensed advisers in the country you reside or where your assets may located.