GCC End of the party 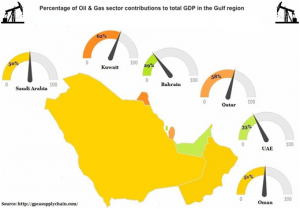 Gulf Cooperation Council (GCC), is the political and economic alliance of six Middle Eastern countries—Saudi Arabia, Kuwait, the United Arab Emirates, Qatar, Bahrain, and Oman. The GCC was formed in May 1981 with an aim to achieve unity among its members based on their common objectives and their similar political and cultural identities, which are rooted in Islamic beliefs.

For the GCC region, oil and gas sector represents approximately 73% of total export earnings, roughly 63% of government’s revenues and 41% of its GDP. The total revenue of the GCC states more than doubled from $317 billion in 2008 to $756 billion in 2012.

Bahrain and Oman are at most risk in case oil prices tumble further, while Qatar and United Arab Emirates are the least vulnerable.

Having benefitted from high oil prices for more than a decade, the GCC governments are mulling fresh ways of raising revenue in order to reduce dependency on oil exports. Value-added tax and excise duties may be the first port of call. If oil continues on its current trajectory, they will not be the last. An elected consultative body has recommended a new 2% levy on remittances from its 1.9m expatriates. If you are an expat residing in the GCC region, talk to a member of Dino Zavagno’s team at Gladstone Morgan to arrange a meeting to learn more on this subject. info@gladstonemorgan.com