The expected has now officially happened. The United States Federal Reserve has called time on “quantitative easing” (QE), a policy that has pumped trillions of dollars into the global financial system.

QE started back in November 2008. The financial system in the US and beyond was reeling from the failure of the investment bank Lehman Brothers and the stage was set for global financial meltdown. 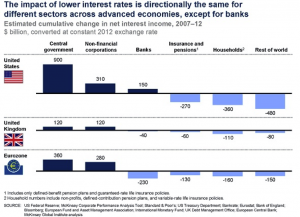 Instead of reducing the price of money – that is, cutting interest rates – the Federal Reserve increased the quantity of money. It did that by going into the financial markets to buy assets and creating new money to pay for them.

Whilst the most profound effect of QE was on the cost of borrowing, it is also thought to have been responsible for much of the strength of stock markets. When the financial crisis hit in 2007-2008, markets fell more than 75pc and they have only recovered because central bankers have turned on the taps and flooded the markets with money.

The theory behind QE is that it helps the stagnant economy with excess cash liquidity, but there are some nasty side effects to this particular medicine especially when it is taken at the same time as low interest rates.

Where borrowers should benefit from QE and low interest rates the reverse is true for savers. The quantitative easing raided the savings of those who had been prudently putting money aside for decades. A study by McKinsey Global Institute states that from 2007 to 2012, the cumulative net loss of interest income for American households was $360bn, compared with a cumulative net loss of $160bn for Eurozone citizens and $110bn (£70bn) for British people.

The financial crisis of 2007/08 unleashed an unprecedented set of measures by the world’s major central banks and quantitative easing was the largest of all. These policies have created an Unchartered interest rate environment. As the quantitative easing draws to an end, the transition back to normality could be a bumpy ride. To understand the impact on your long-term savings and pensions contact Dino Zavagno and the team of specialists at Gladstone Morgan.