Could a default lead to Greece´s exit from the Euro? 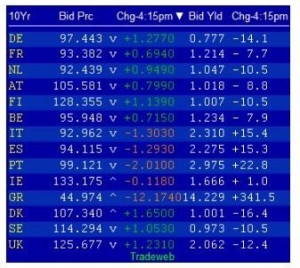 Greece looks set to default on a €1.6bn debt payment due to the International Monetary Fund (IMF).

If Greece does not make the transfer it would join Somalia, Sudan, and Zimbabwe in falling into arrears with the IMF. Furthermore the country will also take a step closer to what some fear could be its exit from the eurozone and another round of economic turmoil in Europe.

Thousands have also been taking to the streets in Greece to support their government’s opposition to the latest debt deal after a clash with the country’s creditors forced a shutdown of its banks and brought the country close to financial collapse.

Alexis Tsipras the Greek Prime Minister surprised creditors this weekend by calling a snap referendum on Greece’s bailout program and austerity measures. The vote is to be held on July 5.

EU leaders including Germany’s Angela Merkel, France’s Francois Hollande and Italy’s Matteo Renzi have warned that the vote on the 5th will effectively be a vote on Greece’s place in the euro.

Creditors have refused to extend Greece’s bailout program until after the vote, prompting anger from Tsipras who is now urging the Greek public to vote “no” to more austerity.

Meanwhile leaders in fellow bailout recipient Portugal, widely considered to be the next weakest eurozone economy after Greece, tried to reassure investors of the health of the economy after the Lisbon stock market slid more than five per cent.