It was 2001, when Jim O’Neill, chief economist at Goldman Sachs coined the term BRIC to represent the emerging economies of Brazil, Russia, India and China as a block. In the past decade, BRICS (“S” for South Africa included later) has become a near ubiquitous financial term, shaping how a generation of investors, financiers and policymakers view the emerging markets.

O’Neill predicted – that by 2041 (later revised to 2039, then 2032) the BRICS would overtake the six largest western economies in terms of economic might. He boldly predicted that these five nations would come to represent the pillars of the 21st-century economy. At the time, many scoffed at this idea. But, critics of BRICS have already been proven wrong as shown by the chart below.

Financially, the 2008 crisis has left old-power western governments and their banks mired in debt and toxic assets. In 2009, when advanced economies’ gross domestic product (GDP) fell 3.43 percent, emerging market economies grew 3.1 percent. Capital poured in – from investors looking for the only place they could actually grow their money. While recently growth has slowed in the BRICS economies, and prospects brightened in some old powers, many doubt the depth or permanence of this shift. 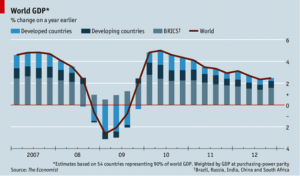 Since the U.S. Federal Reserve started to taper its $85 billion monthly stimulus policy that had been sending cash towards emerging markets, the BRICS as well as others experienced massive currency drops and capital outflows. BRICS nations finally turned to each other for assistance, instead of their developed country counterparts, and decided to cushion themselves from volatile global markets. This was the genesis for “BRICS Bank”.

Static voting rights at the World Bank and IMF, shortfalls in financing for infrastructure, and the national priorities of the BRICS countries, finally gave way to the new BRICS Bank. The bank will start lending by 2016 with an initial capitalization of US$50 billion and a US$100 billion emergency reserve fund.

BRICS bank may eventually challenge the World Bank-IMF hegemony over matters such as: funding for basic services, emergency assistance, policy lending, and funding to conflict-affected states. It could be the building block of alternative world order.

How well is your portfolio positioned to take advantage of the global power shift? Contact Dino Zavagno MD at Gladstone Morgan or a member of his team for professional advice.