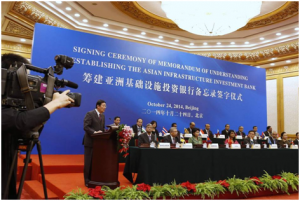 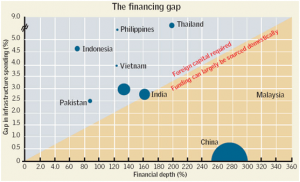 The financial system that exists today was largely shaped after World War II. In an effort to restore international monetary stability, US and Britain, led the way to the formation of International Monetary Fund(IMF) and the World Bank in 1944.

The mandate for IMF was to maintain exchange-rate stability and help countries balance payment issues, while the mandate for the World Bank was to lend money to war-ravaged and impoverished countries. A European traditionally takes charge of the IMF and an American leads the World Bank. The grip of US over the two bodies – both based in Washington – has frustrated the emerging nations for a long time.

Those frustrations have now manifested themselves in the creation of Asian Infrastructure Investment Bank (AIIB).AIIB was conceived by President Xi Jinping and is aimed at addressing Asia’s enormous infrastructure needs.

Seeded with $100 billion (most of which is Chinese money), the AIIB counts among its members some of Asia’s poorest countries such as Bangladesh, Cambodia, and Pakistan; however, recently, the AIIB gained significant momentum as well as press coverage when it signed up countries such as France, Germany, Italy, the U.K., and Switzerland as members. The wealthy European countries’ decision to join AIIB provoked the ire of American officials. They accused the UK of “constant accommodation” of China. Covertly, the United States put pressure on countries around the world to stay away.

Asia houses about 4.5 billion people, or about 62% of the world’s population. The world is hugely dependent on Asia to drive future economic growth. Without adequate infrastructure, global economic growth will surely disappoint. China itself is a testament to the extent to which infrastructure investment can contribute to development.

Financial markets have proven unequal to the task of recycling savings from places where incomes exceed consumption to places where investment is needed. China has $3.8 trillion in foreign currency reserves that are yielding anywhere from 0% to 2%. China’s foreign reserves could garner higher investment returns by investing in Asian-based infrastructure projects. The biggest threat that US foresees is that China will utilize AIIB to increase its sphere of influence in Asia and over time, elevate the Chinese currency, the Yuan, to compete with the U.S. dollar and the Japanese Yen as the region’s reserve currency.

Beijing has extended the invitation to over 57 countries to join AIIB. Those invited have expressed a keen interest in joining and whilst this maybe against the wishes of US, it shows that Beijing may have the ability to influence global economic decisions. Stay tuned to the Gladstone Morgan Blog for more analysis and insights on events and news that matter to you.