As the mining boom wanes, Australia pivots to Services & Manufacturing 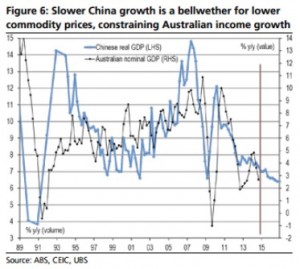 On May 5, the Reserve Bank of Australia cut the cash rate to a new record low of 2 per cent, citing ongoing economic weakness for its decision. The widely expected reduction, the second in three months, takes lending rates to the lowest point since at least the late 1950s. The Australian dollar immediately reacted, plunging more than US0.70¢ to US77.88¢.

Through a combination of good policy and good luck Australia has managed to avoid recession for more than two decades. Thanks to its close trade links with China, and a well-targeted fiscal stimulus, it was one of the few developed countries to avoid a recession during the 2009 financial crisis.

However, figures released on 4 March 2015 show that GDP growth slowed to just 0.5% in the last three months of 2014. More worryingly, unemployment has edged upwards to 6.4%, the highest level in 13 years.

The latest trade figures show falling commodity prices have landed Australia with a bigger than hoped deficit and stripped a significant amount off economic growth. In the period between 2010 and 2013, the iron ore price averaged more than $US140 ($182) a ton. It’s now below $US50. It is worth noting that Australian GDP is closely linked with Chinese GDP via the strong commodity trade ties. Slower China growth is a trigger for lower commodity prices, thus constraining Australian income growth.

The mining boom caused major strengthening of Australia’s terms of trade (the ratio of prices received for commodity exports to prices paid for imports), thus strengthening the Australian Dollar. While a strong Australian Dollar made imported goods and service significantly cheaper for Australian consumers, it squeezed other Australian industries. This downside of the boom was a manifestation of the so-called “Dutch disease”. According to Dutch disease theory, real exchange rate appreciation worsens the international competitiveness of the economy’s traditional tradable industries, most notably in the manufacturing sector.

A big fall in the Australian dollar would lift the economy into recovery mode, with mining, tourism and manufacturing likely to be among the big winners.

Despite cutting interest rates the Reserve Bank of Australia still has a fight on its hands – trying to tame a strong Australian dollar. RBA is aware that the outlook for the economy rests with the ability of the manufacturing and services sector to pick up the slack left by a declining mining sector. As Australia kick starts its economy, high quality investment opportunities are opening up for interested investors. Talk to Dino Zavagno or a member of his team at Gladstone Morgan if you are keen to know more. Info@gladstonemorgan.com