In 2010, when South Africa hosted the football World Cup, a Tswanian phrase, Ke Nako (“It’s Time”), reverberated across the world like the cacophony of a million vuvuzelas, announcing that Africa’s moment had come. Over the past decade, Africa’s real GDP grew by 4.7% a year, on average—twice the pace of its growth in the 1980s and 1990s. The surge cut across nations and sectors. The continent is among the fastest-expanding economic regions today. In fact, Africa and Asia (excluding Japan) were the only continents that grew during the recent global recession. 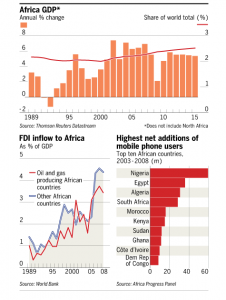 Africa’s four most advanced economies—Egypt, Morocco, South Africa, and Tunisia—have well-developed manufacturing and service industries. They have relatively high per capita incomes and more stable GDP growth than most of the other economies, despite the political risks that have come to the fore in North Africa.

The continent was home to more than 1bn consumers in 2010 and this figure is projected to reach 1.3bn by 2030. Consumer expenditure is also mushrooming: it was worth $600bn in 2010, representing 8% of consumer spending in the emerging markets. It will be worth as much as $1 trillion by 2020.

Important shifts are happening in the manufacturing sector, reflecting transforming global consumer technology manufacturing trends, which have caught the world’s attention. China’s exports of technology-based goods to the continent have burgeoned. Between 1995 and 2008, exports rose by 23% per year. Export levels reached $60bn overall in 2012, with electronics accounting for around 18% of this. Between 2002 and 2010, the growth of Japan’s exports to Africa increased 28% to reach $12bn. Consumer electronics make up a sizeable proportion of growth in this market. Companies such as Sony, Casio, Sharp and Fuji are all doing well in the African market and their ambitions are strong.
In many ways Africa holds the same potential that China did 20 years ago. Demand is growing, and foreign direct investment has soared: from $9.4 billion in 2000 to $46.4 billion in 2009. Just as investing in China embodies some political risk, so too does doing business in Africa. Talk to Dino Zavagno at Gladstone Morgan to discuss investing opportunities in this burgeoning region at info@gladstonemorgan.com